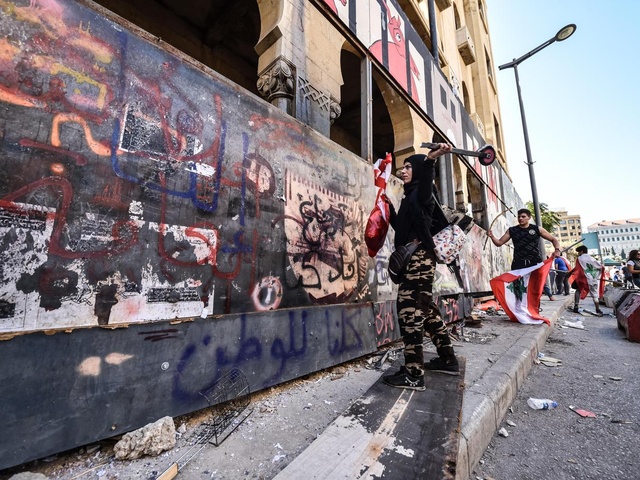 The Arabic title:’ Habbaytik Ya Bint Beirut’ translates to 'I loved you Beirut's daughter'.
These field recordings were taken in Beirut during the October 2019 revolution. The collage is done in a non-faded, brutal kind of sequence in order to show the intense and ever present feeling of the unknown since on the ground of the Lebanese revolution, it was really never sure what was going to happen next. The intention is to take the listener to relive the collective struggle and anger of the Lebanese people as they express their frustration towards a murderous political regime.

• The collage’s first field recording is of young musicians singing Che Guevara, an ode to the Latin American protests happening simultaneously, using various instruments, most of them makeshift instruments found on the grounds of the protests.

•  The second field recording is the sound of a mob of angry protesters, old, young, male female, banging, scraping and tapping metallic surfaces around downtown Beirut, near the parliament building, creating a cacophony of metallic noises.
•
• The third field recording is of an old man singing local folk songs on his electric ‘Ud, we can hear an electroacoustic slap back delay effect on his voice as he explains the names of the songs he is playing.
•

joseph doumet is passionate about experimental noise and experimental music in general.
His personal process involves experimentation with found objects and tape manipulation and his main interest and inspiration is shamanism, specially shamanic old and new musical  instruments and transformative music rituals.