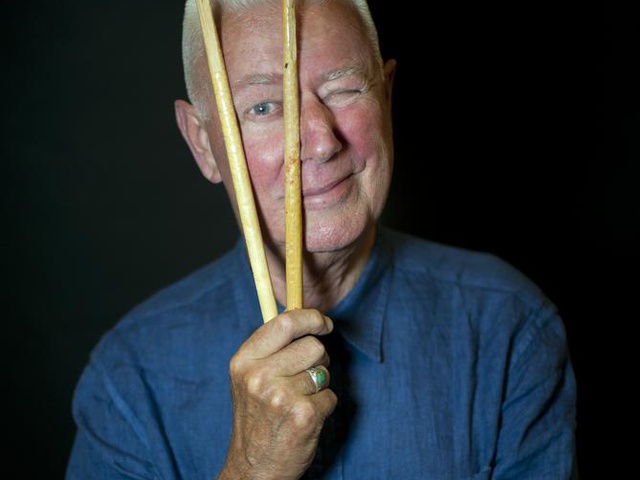 Tonight Han BENNINK is with us for a live radio session broadcasted from Les Ateliers Claus.  During his residency he will take some time to share this moment with all of you!

Drummer and multi-instrumentalist Han Bennink was born in Zaandam near Amsterdam in 1942. His first percussion instrument was a kitchen chair. Later his father, an orchestra percussionist, supplied him with a more conventional outfit, but Han never lost his taste for coaxing sounds from unlikely objects he finds backstage at concerts. He is still very fond of playing chairs.

In Holland in the 1960s, Bennink was quickly recognized as an uncommonly versatile drummer. As a hard swinger in the tradition of his hero Kenny Clarke, he accompanied touring American jazz stars, including Sonny Rollins, Ben Webster, Wes Montgomery, Johnny Griffin, Eric Dolphy and Dexter Gordon. He is heard with Gordon on the 1969 album "Live at Amsterdam Paradiso" (on the Affinity label) and with Dolphy on 1964s "Last Date" (PolyGram). At the same time, Bennink participated in the creation of a European improvised music which began to evolve a new identity, apart from its jazz roots. With fellow Dutch pioneers, pianist Misha Mengelberg and saxophonist Willem Breuker, he founded the musicians collective Instant Composers Pool in 1967. Bennink anchored various bands led by Mengelberg or Breuker, and appeared in their comic music-theater productions.

Bennink attended art school in the 1960s, and is also a successful visual artist in several media, often constructing sculpture from found objects, which may include broken drum heads and sticks. He has designed the covers for many LPs and CDs on which he appears. Bennink is represented by Amsterdam's Galerie Espace, and has been the subject of several one-man shows, including one at the Gemeente Museum in the Hague in 1995.

In 1966, Bennink played the US's Newport Jazz Festival with the Mengelberg quartet. From the late 1960s through the '70s Bennink collaborated frequently with Danish, German, English and Belgian musicians, notably saxophonists John Tchicai and Peter Brötzmann, guitarist Derek Bailey and pianist Fred van Hove. Bennink, Brötzmann and van Hove had a longstanding trio well documented on FMP Records. There Bennink also showcased his talents on clarinet, trombone, soprano saxophone and many other instruments, also featured in a series of solo albums he began in 1971.

Nowadays he is frequently heard with tenor saxophonist Tobias Delius's quartet and in a trio with pianist/keyboardist Cor Fuhler and bassist Wilbert de Joode, and he still collaborates occasionally with jazz luminaries such as Johnny Griffin, Von Freeman and Ray Anderson.

A conspicuous feature of Bennink's musical life since the 1960s is the spontaneous duo concert with musicians of many nationalities and musical inclinations; in the '90s he recorded in duo with among others pianists Mengelberg, Irene Schweizer and Myra Melford, guitarist Eugene Chadbourne, trumpeter Dave Douglas and tenor saxophonist Ellery Eskelin. Since 2008 Bennink has his own Han Bennink Trio with Joachim Badenhorst on clarinet and Simon Toldam on piano.