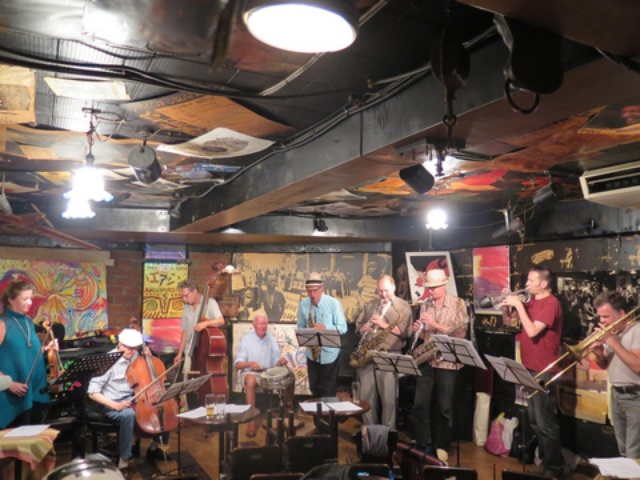 History of the ICP Orchestra :

In 1958, guitarist Jim Hall, in liner notes to a Jimmy Giuffre album, used the term “instant composition” to describe improvising. A few years later, Misha Mengelberg, knowing nothing of this, re-coined the term, and it stuck. A quiet manifesto, those two English words countered notions that improvising was either a lesser order of music-making than composing, or an art without a memory, existing only in the moment, unmindful of form. Misha's formulation posited improvisation as formal composition's equal (if not its superior, being faster).

Yes but: Misha says he was thinking of “instant coffee,” stuff any serious java drinker recognized as a sham substitute. He deflates his lofty idea even as he raises it. In the mid-1960s Mengelberg became involved with the Fluxus art movement, which he found inviting because it stood for nothing, had no ideals to defend. What bound together Fluxus's conceptualists, shock artists, early minimalists, musical comics et cetera was a need for a performance format that could accommodate them all. (Hence that symbol of '60s kookiness, the multimedia Happening.) Eventually he formed a band with that kind of flexibility: the modern ICP Orchestra.

ICP co-founders Mengelberg and drummer Han Bennink have played together since 1961; before long they’d played on Eric Dolphy’s 1964 Last Date and in a successful Dutch quartet, until they brought in the anarchistic young reed player Willem Breuker, whose disruptive presence tore the group apart. That was OK; Han and Misha liked musical confrontations. Mengelberg had studied composition at the Hague conservatory (alongside his friend Louis Andriessen); in his ’60s game piece “Hello Windyboys,” two wind quintets variously engage in call and response, communicate in musical code, interrupt or block each other, or seduce their rivals into cooperating. They did formally what ICP’s musicians now do informally.

Bennink, Breuker and Mengelberg founded the ICP co-op in 1967. In 1974 the saxophonist left to form the Willem Breuker Kollektief, longtime flagship of Dutch improvised music. Mengelberg (and Bennink) founded the raggedy ICP Tentet (including German saxophonist Peter Brötzmann, and sometimes cellist Tristan Honsinger). That band matured into something very like the present-day ICP Orchestra in the 1980s, with the addition of younger players, some of whom have been there ever since: trombonist Wolter Wierbos, saxophonists/clarinetists Michael Moore and Ab Baars, and bassist Ernst Glerum. When they were new to the orchestra, Misha rehearsed the players in various performance strategies—such as the uses of his “viruses,” self-contained packets of notated material a player could cue into any composition to infect or disable it. The musicians learned how to deal with fellow players’ quirks of timing or intonation, how to confound their colleagues before their colleagues could confound them, how to bend or subvert the music in performance, and run little subroutines within a piece.

Another, jazzier part of their education was a series of repertory projects, devoted to Mengelberg’s pianistic and compositional heroes Herbie Nichols, Thelonious Monk and Duke Ellington. Those projects served as object lessons in the value of pretty melodies and voicings (Ellington), the construction and subversion of chords (Monk) and how to devise chord progressions that move in unusual ways (Nichols). Pieces by each of those composers still turn up on ICP set lists (along with a few by Hoagy Carmichael), and those lessons still pay off.

In time, the players came to understand that any of the possibilities Misha had raised was available for use at any time, on any piece. Members could also make up new wrinkles on the spot, confident everyone else would pick right up on it. That also proved true with the players who joined ICP later: German trumpeter (and now New Yorker) Thomas Heberer; new music violinist/violist Mary Oliver, and saxophonist/clarinetist Tobias Delius. Cellist Honsinger rejoined in the 90s as well. (All also lead their own ensembles or occasional projects.)

So the mature ICP is a mixed ensemble: part jazz band, part chamber orchestra. On stage, the space between Misha’s piano and Han’s drums is occupied by a thorny string trio: viola, cello and doublebass. Across from them is a five-piece horn section, three reeds and two brass. As in Ellington’s band, distinctive, individual players can merge beautifully on the written material.

Indeed, given their individuality, the blending is remarkable. Sleek-sounding Mary Oliver brings the conceptual rigor of new composed music to the strings; Tristan Honsinger is the anarchist, testing limits; Ernst Glerum with his deep woody bass tone anchors the string and rhythm sections. (And he gets a beautiful tone when he bows the strings.) Thomas Heberer has solid bebop chops, and a quarter-tone trumpet to let him get into the cracks in the 12-note scale. The blustery, slippery Wolter Wierbos can imitate any trombone sound he ever heard, without losing his own voice. Ab Baars favors extreme clarinet high notes, and a loud but nakedly vulnerable tenor saxophone sound. On clarinet or alto Michael Moore can be sweetly lyrical or sarcastically sour. Tobias Delius’s big, furry tenor tone harks back to the swing era, but his ear is decidedly modern.

Meanwhile, drummer Bennink amplifies and gooses soloists’ rhythms, and sets optimal tempos for limber swing. He’s loud but always listening, and has excellent instincts for pulling the plug when a particular episode or gambit has run its course. And Misha colors and subtly influences the action from the keyboard. As pianist he took from Monk the idea that effective comping may be more obstinate than sympathetic—and that sometimes, silence is the best option.

To keep things fresh, Mengelberg would write out and distribute set lists moments before the players hit the stage. Those lists typically include several compositions separated by spontaneous improvised sub-groups, allowing the players the option of improvising their way out of and into the written themes. There might also be an “instant composition”—the players taking their cues from one of their fellows, who conducts their improvising using informal pantomime gestures.

The band’s big enough to shout but compact enough to hold the road on sharp turns. In performance, its tone and frames of reference keep shifting. The action is fluid, as in a dream: surreal music for real. An ICP set contains new and old tunes, jazz business and maybe a little funny business, full-force raveups and improvised breakdowns.

Nowadays, all the players take turns writing those set lists—Bennink most frequently. And the players bring their own pieces, and new arrangements of older Mengelberg tunes. The music’s full of surprises, unexpected turns, limber grace and strange eruptions. Nothing else and no one else sounds quite like them, and no two gigs are ever alike.