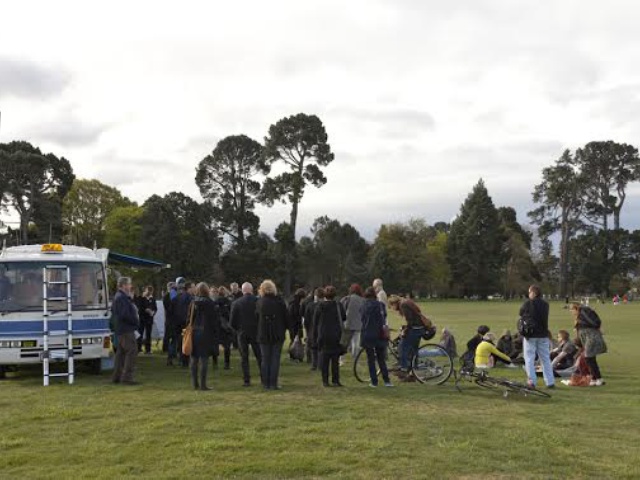 I was using six watts when you Received me

by Maddie Leach and Jem Noble

this edit for radia reframes a small portion of audio material from the original project.

From a small Nissan Civilian bus in the wide open fields of Christchurch’s Hagley Park, at scheduled but irregular times, ham radio operators from the Christchurch Amateur Radio Club attempted to contact the International Space Station as it orbited above the city. I was using six watts when you Received me had the radio call sign ZL3ISS, its own QSL card, and transmitted on 107.1 FM for local ground-based audiences. Leach and Noble worked with material held by the National Sound Archive Ngā Taonga Kōrero to assemble 34 audio tracks sourced from historical recordings made in buildings and public spaces now lost or transformed in the aftermath of the Christchurch earthquakes.  Each track is framed with their own distinctive interval signal composed from recordings of the Christchurch Cathedral bells.

I was using six watts when you Received me operated as a searching attempt to recall a sense of place and to connect to an ‘elsewhere’ beyond the current geographic and social conditions of the post-quake city. The ISS contact sessions and local broadcasts were overlaid to produce intriguing new sonic artefacts that were subsequently acquistioned to the Sound Archives collection. The project traversed aspects of the everyday and the extraordinary to include recordings of dog walkers, street kids, local police, port workers and community events to the opening ceremony of the 1974 Commonwealth Games, the Queen’s visit in 1953 and a live recording of the February 22 earthquake in 2011.

“Listening to two different generations of radio voices, punctuated by the bells and the blips of the transmission, I start to draw a diagram that connects the widely disparate geographical elements of the work: the National Sound Archive on Cashel Street,[i] the temporary encampment in Hagley Park, and the uncharted vacuum of outer space. At the centre of the diagram, and of the sculpture project, sits the van and transmitter: a purposeful, itinerant monument, inhabited by amateur radio operators. Surrounding it in a circle is the public park, bisected by lines of visitors to the van, and overlaid with the archival radio broadcast — a series of dotted lines — and arcing upwards is the line of radio waves which reach the ISS and the astronauts and continue beyond, off the page and perhaps forever. Enveloping the whole is the Twitter feed associated with the project’[ii]; I draw a kind of cloud, thick with zigzags. It makes a clean equation on paper, completely dematerialised and spanning a vast stretch of space, and sits cleanly with Leach and Noble’s stated desire not to add more stuff to a cluttered and broken post-quake city.

Largely immaterial, the work is held together by a sculptural logic which relies on displacement: the tenuous possibility of making a real connection to somewhere else — somewhere as distant as the past, or outer space —and the currency of sound as a vehicle for collective recall, and anticipation. It is both preposterously expectant and resolutely conceptual. Maybe, maybe there will be an affirmative reply to one of the call signs issued. A small community of believers arrive intermittently at the van in time for scheduled passes, but it’s not a response they come for. Rather it’s to listen to the still-present voices of a Christchurch that was, and to be part of a transaction with the farthest reach of inhabited space. They come to listen to the radio. They come to remember what it’s like to get lost.”

[i] Based in Christchurch, the National Sound Archive is a not-for-profit organisation owned by Radio New Zealand. It holds over 70,000 audio records, and is publically accessible for research. See http://www.soundarchives.co.nz.

[ii] Throughout the project fragments of the archival recordings were released as cryptic, often hilarious or caustic tweets. On 21 September the tweet came from a Jack Perkins Spectrum documentary on Hagley Park, featuring Gail and Debbie the Labrador: ‘I said “you haven’t seen a big yellow Labrador looking a little lost have you?” He just made an #indecent suggestion and exposed himself.’

Jem Noble (UK, 1974) lives and works in Vancouver (unceded Coast Salish First Nations territory). He has produced solo projects in Canada, Australia, New Zealand and the United Kingdom and collaborated with a wide range of artists, film-makers and cultural producers. His practice traverses still and moving image, sound, object-making, text and performance. Noble holds a BA (Hons) in Philosophy from University of Wales Swansea and maintains a particular interest in posthumanism. His work explores connections between materiality and subjectivity across physical, experiential and political domains. Within this, themes of framing, fictionality, indeterminacy and co-production have informed much of his recent making.

Noble has given lecture-performances at dOCUMENTA (13), Contemporary Art Gallery and Access Gallery, Vancouver, and The Engine Room, Wellington (2013). He has developed projects for: SCAPE 7 Christchurch Biennial in collaboration with Maddie Leach (2013); Manifesta 7 in collaboration with Piratbyrån (2008); FUSE Magazine Online Projects (2012); Paul O’Neill’s Our Day Will Come, Tasmania (2011) and Edmonton (2014); VIVO Media Arts, Vancouver (2009) and Spike Island, Bristol (2008). His work has been shown in group exhibitions including Soundworks, ICA London (2012); Gracelands at EVA International (2012); and FTP, Museum of Haifa (2012). Noble has undertaken several collaborations with Turner Prize 2012 winner, Elizabeth Price, producing sound and music for her large-scale video installations.

Maddie Leach (NZ, 1970) is an artist based in Wellington, New Zealand. Her practice is one that seeks viable ways of making artworks in order to interpret and respond to unique place-determined content through a process of establishing specific relationships between form, materials, locations, histories, events, individuals and communities. Leach’s projects favour a keen poetic resonance alongside strong conceptual and formal rigour. Within this framework she has consistently varied the way she resolves her work – having fabricated objects or had them fabricated for her, used text and print media, worked with video, performative actions and processes of exchange. Elements of uncertainty and risk become evident in many of her projects where idiosyncratic narratives are drawn between a tenacious logic of material and economic actions, elusive hopes and fragile navigations of possibility.

Leach’s project If you find the good oil let us know (2012-14) has been nominated for the Walters Prize 2014 at Auckland Art Gallery. Last year her work was included in the 5th Auckland Triennial and SCAPE Biennial of Public Art. In 2012 she was Taranaki Artist in Residence with the Govett-Brewster Art Gallery in New Plymouth and in 2008 was an International Artist in Residence at the National Sculpture Factory in Cork City, Ireland. In 2014 she has had international residencies with Spaced (Perth, WA) and Spike Island (Bristol, UK).