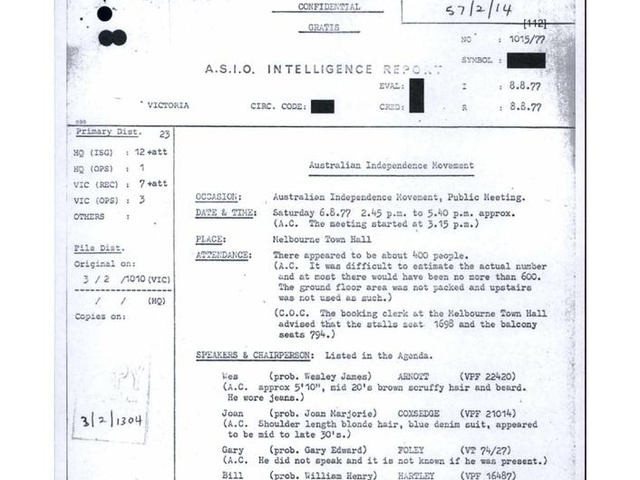 Listening Through Walls, by Lucreccia Quintanilla

In 2014, through the Freedom of Information Act, a series of formerly unavailable files held by the Australia Security Organisation became available to the public. Melbourne-based artist Lucreccia Quintanilla became interested in working with certain of these files, in developing a commissioned work for If People Powered Radio: 40 years of 3CR, an exhibition commemorating the 40th anniversary of important Fitzroy-based community broadcaster 3CR radio station at Gertrude Contemporary gallery in Melbourne, Australia, which ran from 18 March–23 April, 2016.

Through presenting physical and material artefacts, “a combination of recordings, technological hardware, photographic and textual documents from the station’s vast historical archive,”alongside new works, performances and broadcasts by contemporary artists, the exhibition foregrounded “the station's history of radical broadcasting and how it has thrived in its endeavour to foreground the often unheard voices of Aboriginal people, women, workers, ethnic and GLBTIQ communities, people with disabilities, environmentalists, artists and musicians”and “an opportunity to explore the politics of broadcasting and listening, and the different material and aesthetic supports that facilitate 3CR’s engagement with its diverse and progressive publics.”

The artist writes: “3CR is a grass roots community radio station which has had a very important and continues to play an important role in developing the left politics of Australia and gives a voice to many issues and communities that otherwise do not get airplay.” In developing the work, she found it particularly interesting that part of the archival material of the station included records of the ways in which it was put under surveillance by the very Government it was critiquing.

The initial work was presented as an installation within the gallery at Gertrude Contemporary, where it staged the dynamics of the secret, and spying. Focusing on a document detailing a meeting held in the Melbourne town hall in august 1977 organised by the Australian independence movement, attended by between 400 and 600 people, the sound of the recorded script being read was amplified through a set of very large speakers in a stack that were pointed towards a wall, but this sound could only be heard through the other side of the wall, by placing an ear to one of a set of glasses which had been permanently secured to the wall. This reworking for radio is a reading of the file as a script for two voices.

is a multidisciplinary artist, writer and DJ. She is currently undertaking a PhD at Monash University. Her most recent exhibitions include Rhythmic Traces at Bus Projects,  If People Powered Radio celebrating the 40th anniversary of Community radio station 3CR at Gertrude Contemporary and Liquid Architecture’s Fem(X) series at Westspace. Quintanilla has received grants from Arts Victoria, the Australia Indonesia institute the National Gallery Women’s Encouragement Award and the Australian Postgraduate Award. Most recently she has been awarded the 2016 NAVA Sainsbury Sculpture grant. She has presented her work in Auckland, Chicago, New York, Berlin, Yogyakarta, Sydney and Melbourne where she is based. Quintanilla has worked as an arts worker at Arts Project Australia, has lectured at Auckland University of Technology and taught at Signal Arts as well as project managing the Multilingual international publication Mapping South. Her collaborative written work with artist/curator Leuli Eshrahi has most recently been published in peer-reviewed journal Writings From Below. She is currently a member of the selection committee at Westspace.