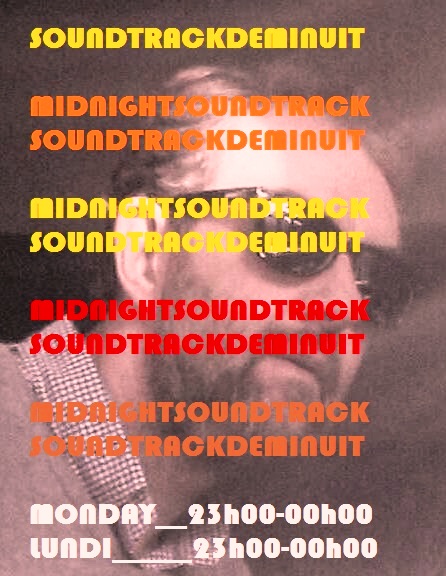 Lived in Brussels in 1994 for 6 months in which time I was listening to Radio Panik almost every evening I was not out. The program was diverse, interesting, alternative and imaginative. I was in love then with a woman called C who later became my wife. I made lots of tapes for her and me that I sent and also carried them back and forth around Europe and from there back to Brussels in 1999. Many years afterwards, divorced with one boy, another woman called A encouraged me to write to Radio Panik to investigate the possibility of broadcasting. More than a year after that - I like these references to abstract time and people - I am broadcasting Soundtrack de Minuit / Midnight Soundtrack from Radio Panik. It is somehow a payback or is it a return? Maybe both, maybe neither and maybe something else I will find out one day.

But… back to Soundtrack de Minuit / Midnight Soundtrack. It is a mathematical broadcast in which the subject is your mood. I want to exercise and change your mood during the hour of the broadcast. No music is more suitable than other, no style is prevalent, all music is good music and dramatic changes – like in a film soundtrack – make it all restless, happy, anxious, peaceful, romantic, upsetting and sensational. Listening to it I want you to sit down and get up, to walk around the room, to remember what you want to forget, to forgive what you still want to remember and all the possible permutations. The purpose is to make you traverse time, continents and styles in a personal way and to sense the power of music, which is the power of people, independent of location, colour, language and time. It is a soundtrack as it could accompany the film of your feelings, your personal histories and emotions, your dreams and – hopefully fewer - nightmares.

Dedicated especially to C who liked the tapes, to A for her encouragement and also to P, who helped me a lot and was very patient during the preparations…