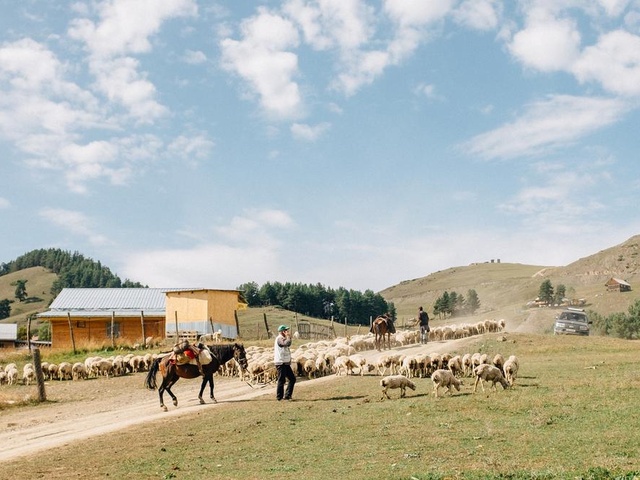 The recording was made at 42°22'06.8"N 45°38'11.2"E in the village of Omalo, in Tusheti, the remote northern region of Georgia. It was made during a residency at AqTushetii, on 2 September 2018, at 11:25. It is 3 min 25 sec long. It is a recording of local shepherds moving a flock of sheep up the mountain along a dusty road, with the help of horses and shepherd dogs. It was recorded on a MixPre-6 with three microphones. A pair of spaced DPA 4660 omnis, and a RODE NTG-3 shotgun. Basic limiting was used in post to increase the loudness, but no other editing was made except fades at each end.

Olle Holmberg (b. 1984, Sweden) is a multi-disciplinary artist, composer, performer and field recordist living in Berlin. Releasing music under the names Moon Wheel and Tusagi since 2013 on labels including Northern Electronics, Not Not Fun and Where To Now?. He studied live audio-vision under Robin Fox in Melbourne, Australia, and has held residencies at Elektronmusikstudion (EMS) in Stockholm, and AqTushetii in Georgia. Live performances include CTM Festival and Atonal in Berlin, KinoBeat in Porto Alegre, Brazil, as well as Norbergfestival and Intonal in Sweden.