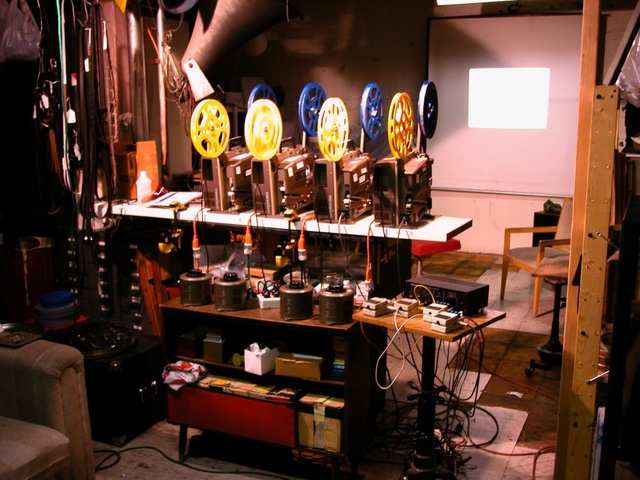 New Yorker Bruce McClure augments 16mm projectors, inserting metal filters, so they project basic shapes and textures. In durational expanded-cinema performances, he superimposes multiple projections, generating interference patterns. Using opaque-then-clear film loops, and adjusting projector focus and light intensity, he conjures up optical and physiological effects, his strobing light triggering an array of synaptic responses. The film loops double as a pulsing optical soundtrack, which he modulates using guitar delay and distortion pedals. McClure’s overwhelming, disorienting works tap into a history of avant-garde inquiry into the phenomenology of flicker. He recently played support for Throbbing Gristle, also indicating his allegiance with industrial culture, with its love/hate relationship with the machine/body.

Bruce McClure's (USA) performances are immersive physical experiences with obvious hallucinatory characteristics. Stretched in time they develop an intensity on the level of light and sound, texture and color, blur and flicker... though McClure never loses the spectator and the surrounding space out of sight. The sound of the projectors can take on monstrous proportions, deformed by pedals often used for electrical guitars… “To me, it’s an experience of nature like a rainy day or being overwhelmed by vertigo in an assault of snow blindness.”

“I think an artist is always working with limits, but these limits are extended and discovered. There’s an art of discovering new limits.”—Robert Smithson

“After all, wreckage is often more interesting than structure.”—Bruce McClure

Bruce McClure is an artist both increasingly known and unknown. His film performances have been featured (and cultishly coveted) in film festivals, galleries, cinematheques, and in various screening programs throughout the US, and in cities such as Rotterdam and Toronto. His name has become, in recent years, common currency in avant-garde circles, yet it takes time and effort to get to know his work, literally and conceptually. You must travel to see it, or if you’re lucky, it has to come to “a theatre near you.” He has twice been featured at the venerable Whitney Biennale, though he has not yet entered its permanent collection as his work poses a bona fide collecting quandary. His pieces are unique, but not in the sense of an object d’art, rather as an ephemeral experience. This can be difficult for a museum to grapple with for many reasons, including archiving, storage, display, fear of obsolescence, immeasurable value, and so on. In short, what would they collect and how would they show it?

McClure has been called a para-cinema artist, a proto-cinema artist, an expanded-cinema artist, and even a vaudevillian. A practicing architect whose draftsmanship has led to a fascinating excursion into sound experimentation, McClure, so goes the bio, “crossed over into the realm of the proto-cinematic as a consequence of trying to represent the beat of a metronome in time with the ultimate goal of laying down a line equal to the circumference of the earth at the equator. By recording the tempo and duration of his markings on paper he could calculate the distance traveled and what remained to complete a circumnavigation of the planet.” Witnessing him at work, alternating between a bank of projectors and a handmade soundboard, makes this goal seem all the more plausible and, perhaps even attainable. But there is definitely a leap. Just as the contradiction of his burgeoning renown is tempered by his difficult-to-see work, there’s another paradox at play. McClure’s practice engenders both a leap forward and a leap back, to a time of analogue physicality. By using cinema’s basic (and mechanical) elements of light, darkness, and sound, he is forging a new language. It’s not photographic, neither is it particularly cinematic (which we are all guilty of ascribing to the realm of the photographic). Is it a form of sculpture or audio-visual composition? We’ve seen the sculptural phase of moving-image art, a seminal shift that has radicalized the gallery space—pieces by Anthony McCall, Bruce Nauman, Paul Sharrits, et al., built up through the display of technical apparatuses, and the three-dimensional girth of projected light or talking monitors. If light is McClure’s primary visual tool and the sonically amplified sprocket hole is his ultimate sound instrument, what, then, do we call his art?

McClure’s work is most commonly referred to as “modified projector performance,” and instrument analogies are not far-flung. The projector is played, experimented with before and during performances. McClure makes use of metal plates fitted into the film shoe assembly, ink dyes “sneezed” onto clear leader, sound-effect pedals, a handmade black screen, and other such adornments in his interference into the normative course of film projection. There’s something baroque about his methods, yet they are strangely minimal at the same time, as if channeling the seriality of the ‘60s, whether it be Sol Lewitt or the under-explored Hanne Darboven. He’s right when he says that we (critics, curators, artists, human beings) look for comparisons to provide structure as an escape from the abyss. Through its singularity, innovation and zealous rigour, McClure’s work elicits searching responses; they are, in a sense, testaments to his efforts and outcomes. Or maybe they result from the primeval sounds and flickering light that engulf the audience. A visceral experience transcends words, as we know, but can we help grasping for language?

He’s certainly not alone in the field of projector performance. Duo Sandra Gibson and Luis Recoder enjoy an international following and are in the Whitney’s collection. McClure’s permutations seem stricter, as if working from a spider’s stratagem, perhaps eluding certain institutional successes. I hesitate to say more, as I came to his work rather late, and have only seen/heard him perform a memorable three times. He blew my mind on each occasion. Rather than delving deep into aporia, McClure saved me by kindly agreeing to indulge the following questions. It may help to read between the lines.