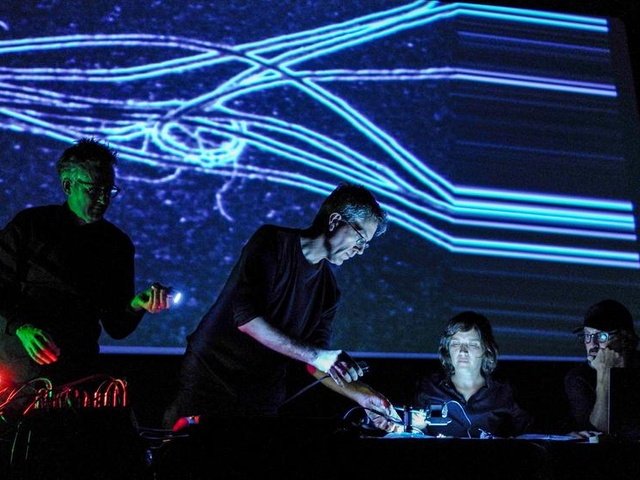 Since 1980, the 4 or 5 or 6 (or more) Floptops known as Negativland, a multimedia collective originally from the San Francisco Bay Area, have been creating records, CDs, video, fine art, books, radio and live performance using appropriated sounds, images, objects, and text.

Mixing original materials and original music with things taken from corporately owned mass culture and the world around them, Negativland surreally re-arrange these found bits and pieces to make them say and suggest things that they never intended to. In doing this kind of cultural archaeology and "culture jamming" (a term they coined way back in 1984), Negativland have been sued twice for copyright infringement. 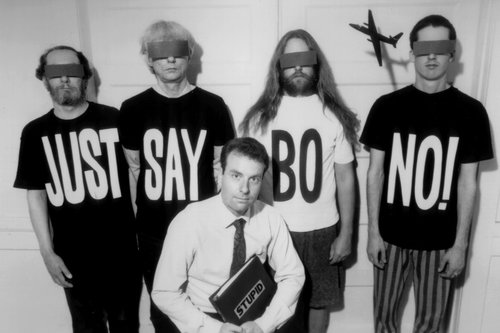 While it is true that, after being sued, Negativland became more publicly involved in advocating significant reforms of our nation's copyright laws (even finding themselves being brought to Washington DC and Capitol Hill as citizen lobbyists for copyright and art issues), Negativland are artists first and activists second. All of their art and media interventions have intended to pose both serious and silly questions about the nature of sound, media, control, ownership, propaganda, power, and perception in the United States of America. Their work is now referenced and taught in many college courses in the US, has been written about and cited in over 150 books and legal journals, and they sometimes lecture about their work here and in Europe.

While their tactics and art practices have now become something a tween can do with a few clicks on their smartphone, Negativland is still interested in unusual noises and images (especially ones that are found close at hand), unusual ways to restructure such things and combine them with their own music and art, and mass media transmissions which have been sources and subjects for much of their work. Negativland covets insightful humor and wackiness from anywhere, low-tech approaches whenever possible, and vital social targets of any kind. Foregoing ideological preaching, but interested in side effects, Negativland is a subliminal cultural sampling service concerned with making art about everything we aren't supposed to notice. 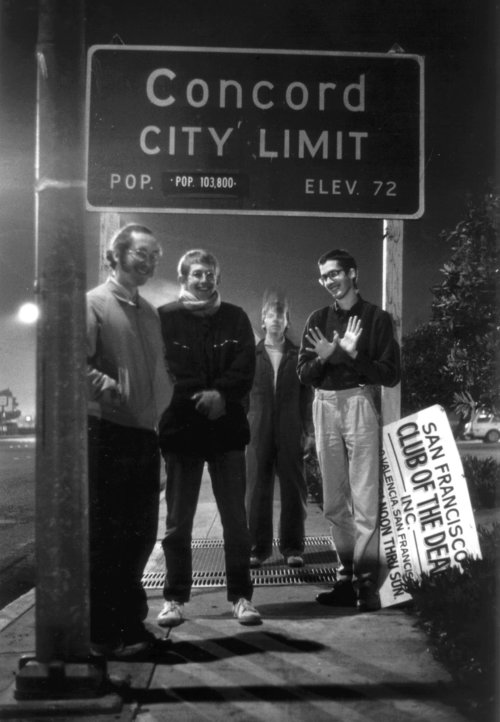 Negativland’s self tilted sound collage debut came out in 1980 when some of the members were still in high school. The album covers were handmade and numbered, with 15,000 one-of-a-kind covers (9000 vinyl and 6000 CD) eventually being made over the next 15 years. A vinyl re-issue is in the works. 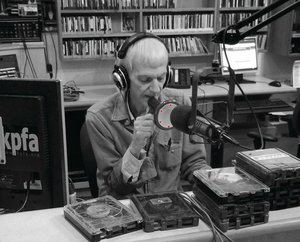 Since 1981, Negativland and an evolving cast of characters have operated “Over The Edge,” a weekly radio show on KPFA FM in Berkeley, California. “Over The Edge” continues to broadcast, and over 34 years of shows are available at The Internet Archive.

“A Big 10-8 Place” came out in 1983. It was the groups third record and their first to be a concept album, a format they have more or less stuck to ever since. This tape splicing extravaganza, three years in the making, came in a wrap-around sleeve with poster, bumper sticker, inspection cards, hand embossed inner sleeve, and a baggie of lawn clippings (or beauty bark in the later CD version).

1987 saw the release of their seminal (and best selling) fourth album “Escape From Noise,” which contained the track “Christianity is Stupid,“ and lead to a startling ax-murder hoax that became the subject of 1989s “Helter Stupid” album.

1993 saw the release of “Free,” a reaction to the current state of affairs in the USA at that time, and in 1995 they released a 270-page book with 72-minute CD entitled "Fair Use: The Story of the Letter U and the Numeral 2," documenting their infamous four-year long legal battle over their 1991 release of an audio piece entitled "U2.”

They were the subjects of Craig Baldwin's 1995 feature documentary "Sonic Outlaws" and created the soundtrack and sound design for Harold Boihem's 1997 documentary film "The Ad And The Ego," an excellent in-depth look into the hidden agendas of the corporate ad world and the ways that we are affected by advertising.

1997’s "Dispepsi" was a high-concept collection of original music, songs, and collaged advertising that brought Negativland’s brand of thirsty cultural critique to the parched and dehydrated psyches of of young consumers everywhere. It focused on the impact of mass advertising via the idea of making a record that was about nothing but Pepsi, Pepsi, Pepsi (and a bit of Coke). 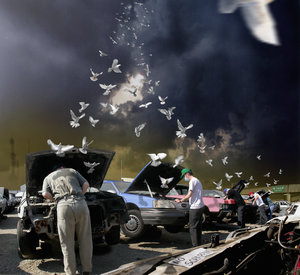 2002 saw the issue of “Death Sentences Of The Polished And Structurally Weak.” Actual wrecking yard detritus, found notes, cassettes, laundry lists, etc, formed the basis of a poignant 64-page full-color book with read-along CD soundscape. The album was a return to pure noise collage and closest in spirit to "A Big 10-8 Place,” but utterly unique in the Negativland canon... no words, just sounds.

In 2004 Negativland worked with Creative Commons to write the Creative Commons Sampling License, an alternative to existing copyrights that is now widely used by many artists, writers, musicians, film makers, and websites.

In 2007, Negativland released "Our Favorite Things", a feature-length DVD collection of their many years of collaborative film work. In 2008 they surprised themselves and everybody else by putting out a toe-tapping all-singing song project of one member's compositions called "Negativland Presents Thigmotactic.” 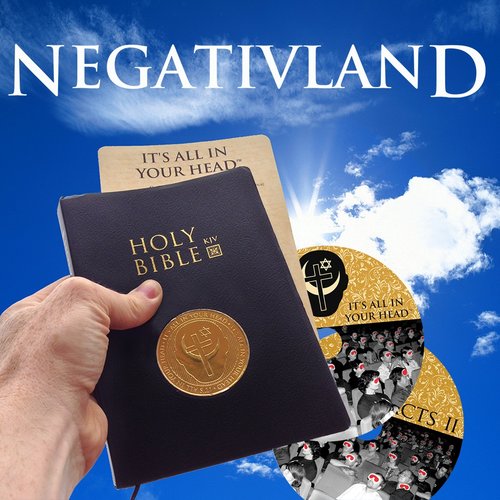 2014’s "It's All In Your Head" found the group tackling their biggest subject ever: why so many humans believe in God.

This ambitious and densely-crafted double CD was packaged inside of an actual King James Holy Bible, repurposed into a "found" art object. Negativland mixed found music, found sound, found dialogue, guest personalities and original electronic noises into a compelling musical essay on monotheism, Christianity, Islam, Judaism, neuroscience, suicide bombers, 9/11, cola, war, shaved chimps, and the all-important role played by the human brain in our beliefs. The audio was first presented in over 35 stage performances as a live radio broadcast (modeled after the “Over the Edge" radio program), with the album itself being assembled from tracks recorded live in front of blindfolded audiences, documenting the unique style of live collage performances that Negativland has been presenting on stages and radio since the formation of the group. 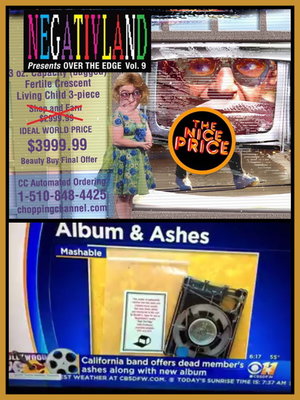 In late 2016, Negativland released a new CD entitled "The Chopping Channel", volume 9 in an ongoing series of albums edited from their ongoing live mix radio show, Over The Edge. The first record released since the 2015 and 2016 deaths of both long-time member Don Joyce and co-founder Richard Lyons, “The Chopping Channel” was a manic collage work about the ravenous commodification of every last aspect of our physical and emotional lives, and was completed in the months before Don died. Taking the packaging to its ultimate and logical conclusion, 1000 copies of the CD included actual “cremains” (ashes) of deceased member Don Joyce himself, and came with the gift of one of Don's unique, handmade audio tape carts, used in the creation of Over The Edge and Negativland live performances as his “main instrument” from 1981 up until his death. As a statement from beyond the beyond, the release is perhaps the ultimate end game in Negativland’s history of found art, appropriation, repurposing and productizing. The “release” of Dons ashes in this manner kept with his lifelong devotion to the creation of art above all else, speaking to the degree to which virtually no idea in art was ever off-limits to him. 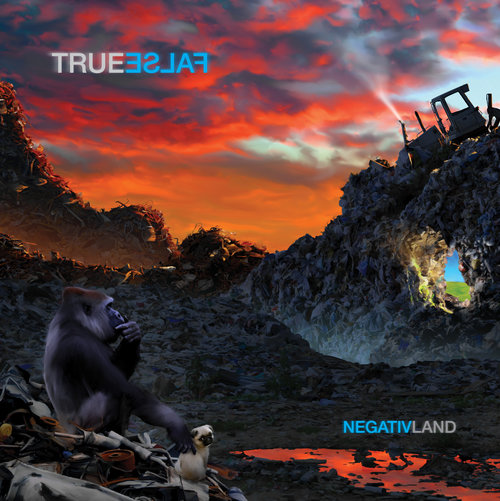 And what is “True False”?

“True False” is their 13th studio album and Negativland’s 2019 return to all original music that you could mistake for actual songs, albeit ones being sung by dozens of sampled vocalists who have never met. The first of two interconnected double albums, “True False” tackles concerns that will be familiar to any surviving fans of the band: our nervous systems, our realities, and the evolving forms of media that inevitably insert themselves between us. Shootings, bees, the right's rules for radicals, climate control, dogs pretending to be children, the oil we eat, capitalism, and the right of every American to believe whatever they want to believe ….all are explored. It’s the first Negativland album to come with a lyric sheet, and is a reminder that we need more than just one memory before we can safely tell anyone else that this is not normal. Juxtaposing Occupy mic checks with US militia rallies, FOX news hosts and ecoterrorists, and your own sanity with the home viewing habits of Negativland's lead vocalist, the Weatherman, as we witness the entrenched political beliefs of left and right cleanly switching sides in under one generation, when you put the word 'True' next to the word 'False', a broader reality reveals itself.

And, finally, just who is even in Negativland these days? Didn't half of you die a few years ago?

For ”True False,” Negativland consists of Mark Hosler, David Wills, Peter Conheim, and Jon Leidecker, as well as our dearly departed Don Joyce, Richard Lyons and Ian Allen. Containing tapes from the earliest years of the band (including dozens of samples that will be very familiar to regular listeners of our radio program Over The Edge), work on ”True False” began in earnest in 2012, folding the decades on top of each other until they finally resembled all of the feelings that tomorrow has for today.