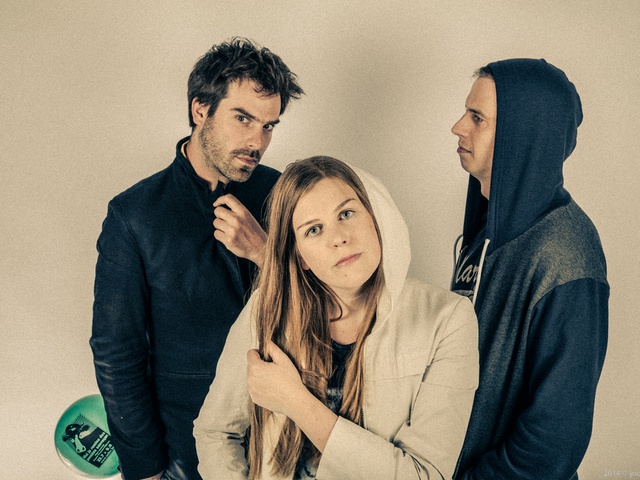 This evening during the Panik Sessions we are proud to present Anu Junnonen. With her trio she will play a live session.

After building a career of seven years, it takes some nerve to make a radical left turn and start again from scratch. Yet that is exactly what Finnish-Belgian singer Anu Junnonen has done on her brand new electro pop album ‘Skeletons’.

When Anu ended up in Brussels as an ‘au pair’ in 1998 and got acquainted with the music of local artist David Linx, she felt as if she had been struck by lightning. Right there and then, the classically trained piano, saxophone and flute player decided to settle down in the Belgian capital and to enroll in the conservatory to study singing. In between courses she met accordionist Tuur Florizoone, with whom she formed a duo and subsequently founded the acoustic jazz quintet aNoo. But as the two albums she recorded with that band (‘The Luckless Lands of the North’ and ‘Sinipiika’) would prove, Anu was far from being a jazz purist. As it turned out, her music was equally influenced by Finnish folk and Argentinian tango.

After Zorko Opacic (a Croat based in Amsterdam) added layers of electronica to some of the tracks on ‘Sinipiika’, Buscemi delivered a remix of ‘Sunday’ and Anu Junnonen moonlighted as a guest singer in bands such as Quark and NorthFace+, the singer became more and more intrigued by loops, samples and digital beats. This new fascination resulted in ‘Skeletons’, the first of her records on which she herself was calling the shots. Now that she invariably used rhythm as her point of departure, her work became more immediate and showed more urgency than anything she had ever released before.

The nine tracks on the new album sound edgy yet transparent, against the grain yet tuneful, experimental yet accessible. “To me it is important for my songs to move the listener and to provoke a sense of recognition in him or her”, the singer offers. Due to her playfulness, her uncompromising originality and her way of combining real instruments with programmed machines, it is fair to say Anu belongs to the same musical family as Norwegian singer Hanne Hukkelberg.

If the album title ‘Skeletons’ has a somewhat sinister undertone, this is definitely no coincidence. “I was in a pretty dark state of mind when I wrote most of the songs”, Anu Junnonen explains. Despite this, the album does not sound one-dimensional at all. This is partly due to Anu’s two main partners in crime: Werner Pensaert, a producer she has collaborated with before, and Gil Mortio, a multi-instrumentalist who is also involved with Brussels underground band Joy as a Toy.

At first listen, you can’t help being struck by the layered voices on ‘Skeletons’. One of the songs is even called ‘Chorale N°2’. But Anu Junnonen is also a member of Brussels Vocal Project, an a capella jazz group that released their first album last Spring. The light-hearted ‘Bumble Bee’ boasts a direct reference to ‘One-Armed Bandit’, a track by experimental Norwegian collective Jaga Jazzist. ‘Maître Abdul’, on the other hand, was inspired by the flyers Brussels residents often find in their letter boxes and in which clearvoyants promise they can predict anyone’s future with a hundred percent certainty. ‘The Winner Takes It All’, the odd one out on the record, is a cover of an old ABBA song, because, as the artist points out, she is a sucker for gorgeous melodies and is not entirely dismissive of kitsch.

‘Skeletons’ is an album that is rich in both sound and colour. And as soon as she takes the stage with Gil Mortio and drummer Alain Deval, you can count on Anu Junnonen to bring out new and unexpected dimensions to her songs. Just prick up your ears and enjoy the magic.