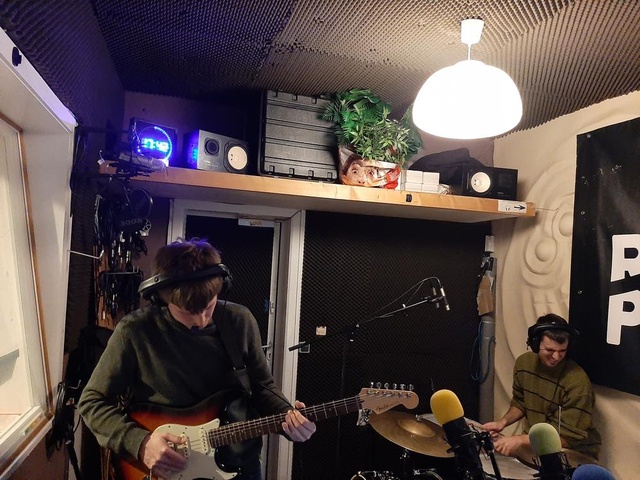 The Third Guy is the Slovenian Primož Sukič on guitar and the Spanish Ruben Orio on percussion.

Their musical, and artistic research is based on exploring musical territories that blur boundaries between improvisation, programmed computer algorithms, and composition. The ensemble also focuses on collaborating with other artists, among whom each of them bring in new personalities and aesthetics, that reshape, and sometimes even redefine and question the identity of a duo

Slovenian guitarist Primož Sukič was born in Koper, Slovenia. He studied at the Academy of music in Ljubljana, at Akademie für Tonkunst Darmstadt, and at the HoGent conservatory (The Royal Academy of Fine Arts (KASK) and the Royal Conservatory constitute the School of Arts of HOGENT) where he specialized in contemporary performance practice with the ICTUS ensemble from Brussels. As a performer his main interests are exploring and widening the possibilities of his instruments, both classical and electric guitar. Through free improvisation and constant collaboration with composers of all generations (Nina Fukuoka, Natacha Diels, François Sarhan, Michael Maierhof, Richard Barrett among others) he is trying to expand the solo and chamber music guitar repertoire and is regularly presenting it on festivals and concert venues in Europe and united States. (Klangspuren festival, Bregenzer Festspiele, Aarhus Jazz festival, Spor Festival, Zvokotok, Slowind, Spectrum NYC ).

He is the founding member of the Brussels based duo The Third Guy, which is interested in exploring borders between composition and improvisation, and he's a member of ensemble Something out there, dedicated to perform music of composer François Sarhan. Besides that he also collaborates with ensembles ICTUS, IEMA, Soundinitiative, Vortex ensemble, Ensemble21, and Neofonia. He regularly works with dancer Jacob Storer from the Trisha Brown dance company, and musicians Tom Jackson, and Seijiro Murayama. He is also interested in exploring cooking recipes from all over the world, and following latest discoveries in space exploration.

Rubén Martinez Orio (Logroño, 1988) is a musician based in Brussels. During his career being a percussionist has allowed him to surf and search in the huge possibilities that the field of percussion offers. “Not being attached to any concrete instrument and staying open to new sources of sound leads my interest in music.” Not only music, but to incorporate other disciplines such as dance, sound art and installation are part of his relation to art.

Since 2014 he has been following the residency-academy with the ICTUS ensemble. This has allowed him to work very closely with dance; he palys with ROSAS, collaborates with students of P.A.R.T.S. and works with choreographers such as Vera Tussing and Naïma Mazic.  Ruben has been performing in venues and festivals such as the Biennale di Venezia, MärzMusik Berlin, Opéra de Paris, Festival van Vlaanderen Kortrijk, SPOR Festival in Aarhus, Neue Musik Ferienkurse Darmstadt and MIXTUR Festival in Barcelona.

Rubén Martinez Orio has been part of the company n ï m since 2016. He has been developing and performing in PoLy-Mirrors and abierta.

Dennis Tyfus is a visual artist and publisher of music/sound/art books/etc via Ultra Eczema. He hosts a radio show at Radio Centraal, while living and ...