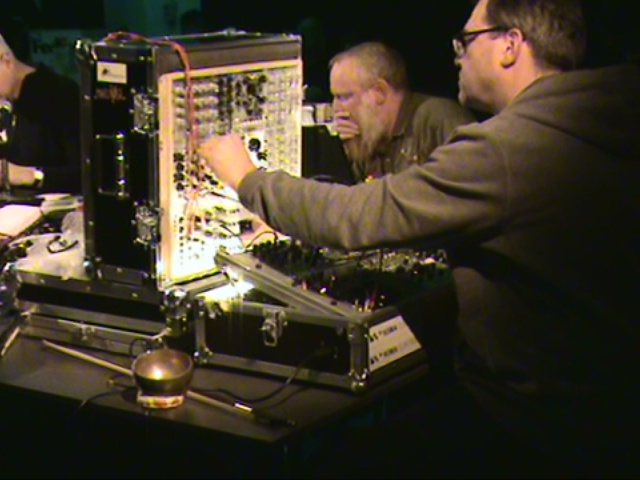 THU20 is an electro acoustic collective, performing improvisational recording sessions in live situations and further processing in the studio. The members of the actual quintet are Roel Meelkop, Frans De Waard, Peter Duimelinks, Jos Smolders and Sjak “DMDN” van Bussel performed at Steim in Amsterdam on Thursday the 16th January.

In the early eighties Roel Meelkop, Sjak van Bussel, Peter Duimelinks and Guido Doesburg played in a post-punk band Club Rialto while Doesburg and Jos Smolders formed Delfsch Wormenkoor. One night Club Rialto was asked for a gig, but due to circumstances they had to abandon the rock beats and turned to drones and noise. Unexpectedly, the audience was raving and THU20 was born, named after the day they rehearsed for this gig. After a while Doesburg left, while Frans de Waard (Kapotte Muziek) got more involved, these days being the fifth member of THU20.  Starting out as live improv band rooted in the DIY home tape scene, THU20 later composed some works in the studio. The distinct difference between live and studio material is still an issue.
While NON, SPK, Throbbing Gristle, Nurse With Wound and Cabaret Voltaire come to mind when listening to the early work, soon, when guitar, bass and rhythm box disappeared, avant-garde composers such as Karlheinz Stockhausen, John Cage, Pierre Henry and Pierre Schaeffer became more important. THU20 hardly releases albums or plays live because all members have their own projects. Their recent double cd ‘Vroeg Werk’ on Monochrome Vision collects early live and studio recordings, and stresses their huge influence on the Dutch electronic music scene since the early eighties.
Although most of the time sluggish, THU20 is currently speeding  up with a new piece commissioned by GX Jupitter Larsen for the compilation ‘Zelphabet Vol. T’ and a new full length release.

Roel Meelkop (1963) studied visual arts and art theory at the Willem de Kooning Academy in Rotterdam, The Netherlands.
During a post-graduate course at the same academy he decided to dedicate his work to sound and music. His musical activities date back to the early eighties when he started THU20, together with Jac van Bussel, Peter Duimelinks, Jos Smolders and Guido Doesborg. THU20 have released several tapes and CD's and performed regularly in Europe.
The working method of THU20 included many discussions about how to compose and why. This period was crucial in forming his ideas and concepts about sound and how to organise it, but it was not until the mid nineties that he was able to fully realise these ideas. The purchase of a sampler and later a computer radically changed his possibilities of working with sound, offering infinitely more control and freedom.
Since then he has worked steadily on a body of work, most of which was recieved enthusiastically in the small but dedicated world of sound art. His other activities include working with Kapotte Muziek and GOEM, together with Frans de Waard and Peter Duimelinks, and organising sound events, mostly in Rotterdam.

Aside from releases, Meelkop also creates site-specific sound installations and performance pieces in collaboration with other artists.

In the last couple of years, Meelkop has focussed on solo works in composition and installation work. A new project with Frans de Waard called Zèbra has also taken up some well spent time.

Frans de Waard (1965) has been producing music since 1984. First as Kapotte Muziek, but throughout the years, he also worked as Beequeen (with Freek Kinkelaar), Goem (with Roel Meelkop & Peter Duimelinks, both of whom are also a member of Kapotte Muziek these days), Zebra (with Roel Meelkop), THU20 and such solo projects as Freiband, Shifts as well as his own name. He has worked for Staalplaat (1992-2003) and since 1986 as a reviewer for his own publication Vital, now only Vital Weekly, an online music magazine, which has been the online source for underground music since 1995. In February 2007 he played various solo concerts as Goem|FDW in Japan, as part of a package tour with Pan Sonic. Frans de Waard also likes to play sets of improvised music with whoever is available, just as he did with people like Guiseppe Ielasi, Jaap Blonk, Howard Stelzer, Roel Meelkop, Andrew Liles, Radboud Mens and the mayor of his home city Nijmegen. In 2008 film maker Harrie Timmermans made a small documentary about his work with Kapotte Muziek under the title ‘What You See Is What You Hear’. He has given workshops and lectures at various places, such as Extrapool, the art academy of Maastricht en ‘s-Hertogenbosch, the Glinka Conservatorium in Moscow and Lithuania. With Scott Foust he formed the duo The Tobacconists in 2009 and with Wouter Jaspers the duo Ezdanitoff in 2010.

Peter Duimelinks music activities date back to the mid eighties, in a time in which he co-founded the musique concrete group thu20 with a.o. Roel Meelkop and Jos Smolders. Working with thu20 was of vital importance to duimelinks and it shaped his ideas and concepts about sound and how to work with it. Traces of this period can still be heard in his more contemporary solowork, which usually consists of field- recordings sometimes heavily reworked but mostly used in it’s pure form, and then organised into a composition.

Jos Smolders (1960) studied architecture at the Delft Technical University but quit and continued the musical tape experiments of his childhood. He started musicological studies of electronic and recorded music, was six years co-editor of Vital Magazine. Active in the underground electronic scene, founding member of the renowned Dutch electroacoustic ensemble THU20, he released his own music on cassette, LP and CD. He now works as a sound designer and composer in Tilburg (The Netherlands). Founder of online magazine and mp3 label Earlabs..